Michael Schwarz is one-third of the production company formed together with his brother John Schwarz and Sam Worthington (James Cameron’s Avatar, Terminator Salvation, and Clash of the Titans). Full Clip Productions specializes in developing projects for film, television, and print – right now, in the form of comic books and graphic novels through a partnership with Radical Publishing. These are three Australians with a vision that extends beyond what you might expect.

Their first comic, Damaged, will premiere later this month at San Diego Comic-Con and be released in stores in August 2011. In addition to that, they’re developing another book for Radical, entitled Patrios (the premise of which is: what if you had to sacrifice one continent to save all the others?), and producing the film version of Rick Remender’s highly praised near-future noir story The Last Days of American Crime (also published by Radical), which will be directed by F. Gary Gray and star Sam Worthington.

Damaged is a 6-issue crime series created by Michael and John Schwarz and written by Eisner Award-winner David Lapham (Stray Bullets). It’s illustrated by Leonardo Manco (Hellblazer) with cover art by acclaimed artist Alex Maleev. Damaged tells the story of two brothers, Frank and Henry Lincoln, long estranged after a violent event in their shared past forces them apart. Over the course of 35 years, the brothers pursue separate paths to enforce justice. Frank, an upright citizen, becomes a distinguished veteran of the San Francisco police department, while Henry, a hardened vigilante, enforces the sort of justice the law is not allowed to. As the brothers approach retirement, each attempts to train a younger protégé in his image to take on the mafia underworld that corrupts the city by the bay. Sparks fly as the same crime scene and political powers bring the two brothers face to face on different sides of the law. [synopsis by Radical Publishing]

This interview was conducted through email.

KARIN LOWACHEE: For those reading this who aren’t strictly familiar with what Full Clip Productions is about, what is your general vision for the company? What are you creatively involved in and want to be involved in that might not already be on the docket?

MICHAEL SCHWARZ: Our basic vision for Full Clip is really about stories. Plain and simple. Stories can be told in various mediums, and sometimes the best platform is a film. Sometimes it’s a comic, or a TV show, or even just across a table in a pub. So that’s what we’ve been trying to achieve. To get all these stories out there in the best way possible. It’s not always our stories, though. As well as the original projects that we thought up, we’ve been finding other material that speaks to us. We should be making an announcement at Comic-Con about something we’ve optioned and are developing that we’re really excited about. In fact, there will probably be a couple of announcements about Full Clip in the near future.

KL: You and your brother John mentioned in other interviews that you grew up reading comics. Had you always envisioned or wanted to write ones of your own professionally?

MS: Yeah, I definitely did. However, the comic industry in Australia is practically non-existent, which is a shame, since there is such a big readership there and I would imagine that the voices coming from there would be very unique and interesting. But I always wanted to have a crack at it. The problem was that I had no idea how to write one. I was able to come up with stories, but didn’t have a clue about the script process and any attempts to put my ideas down in script form turned out terribly and were buried deep where no one would ever see them.

KL: Why do you think there isn’t a thriving comic industry in Australia, especially if there is a readership?

MS: I guess it may have something to do with the population size and that it’s such a hard industry to crack as a publisher and make money. Without the publishers, the talent has to work abroad. I’d love for it to happen, though.

KL: Were there any ‘surprises’ between what you expected the process would be like – developing a comic idea like Damaged – and the reality of it?

MS: The biggest surprise for me was hearing that David Lapham wanted to write it. My brother and I had written a treatment for it and Radical started sending it around and literally the first person that they asked us about was Lapham. I remember getting an email from David Wohl, the editor in chief, saying that there was some interest from a writer and I expected it to be a young [up-and-comer]. Then he casually mentioned that it was David Lapham and I thought it must be some kind of mistake. That was the biggest surprise. The rest has really been a learning experience. But we’ve been surrounded by really smart people. Radical’s editor, Renae Geerlings, has been incredible to work with and helped us learn our way around parts of the process that we had no idea about, such as page layout and lettering.

KL: What did David Lapham say about what drew him to wanting to work on Damaged?

MS: I couldn’t say exactly what it was that drew him to it. I think it may have been that he liked the idea of playing around in a kind of Dirty Harry-esque world. All I really remember is him seeming to dig that we wanted this to be a comic first, not something that was just a launching pad for a movie. That’s not to say it won’t be a movie, but we were very clear to him that we weren’t concerned if something wasn’t cinematic as long as it worked in the comic medium.

KL: What are some perks to collaborating as you do with your brother and Sam and the writers at Radical, as opposed to depending solely on yourself for the bulk of the creative process before publication (as many writers do)?

MS: I happen to really like collaborating, as I don’t have great chops as a writer, unfortunately. And working with Johnny and Sam is the most natural thing in the world to me. We all trust each other to be honest and no one is too precious, so if an idea I throw out there is a little on the nose, those guys will probably start laughing at it, and after I choke back a tear, I’ll probably start laughing too. I think if you bring in your collaborating partners early in the idea and they bounce off it quickly and it turns into something else, then you never feel like it’s completely yours, it’s everyone’s, and you can look at it more objectively. That works best for us. Plus, I’ve found I’m not disciplined enough to lock myself in a room for hours at a time to write a novel or screenplay. I’ve got tremendous respect for writers that can do that every day.

KL: Damaged is a complex, layered story. What are some of your inspirations or influences that impact how you develop your ideas? Do you generally start with basic questions and conflicts that interest you or spark discussion? Are there any specific ‘sources’ that you tend to encounter along the way – books, literature, articles, history, etc.?

MS: The inspirations for Damaged are all comic based. Obviously The Punisher is a big inspiration, but also Batman and any vigilante character. But the ideas that I wanted Damaged to pursue were really about the moral implications of stepping outside of the law. It’s something that we’ve always accepted as right. Damaged isn’t saying that it’s right or wrong. It deals with the consequences. What happens when you’ve lived your life to a specific code and you now want to pass that on. I’d love to get into it more, but I’d be straying dangerously close to spoiler territory. Patrios came from similar ideas. I can’t really talk about that at all yet, but the ideas and morals of the characters are what drives that story, too. That one came from some specific ‘sources.’ Including actual news stories and actual moments in history.

KL: Damaged will be debuting at Comic-Con and distributed to the wider world in August 2011. The very positive reviews have begun to roll in, so congratulations on that! Were you guys nervous before reading those first reviews?

MS: Yep. It wasn’t so much that people wouldn’t like our idea. It was more to do with the fact that we’ve got such great and respected talent involved (Lapham and Manco) who get such great reviews with their other work, you don’t want to be the project that they do that sucks because people are gonna know that it’s not because of them that it sucks. But the great reviews that are popping up have been a great feeling.

KL: If it’s okay to talk about Patrios for a bit, why the name change from Patriots?

MS: Originally, we called it Patriots for a very specific reason. As Australians, we come to the word “patriots” without the baggage that some Americans attribute to the word. We meant it as in the characters in the story are patriots to the human race, not a country. Our writer, Joshua Dysart, looked into it and found the word “patrios,” which is a precursor to the word “patriots,” that is ancient Greek (I believe) for “of the father.” Thematically, this worked perfectly and actually works better within the story, so it stuck. 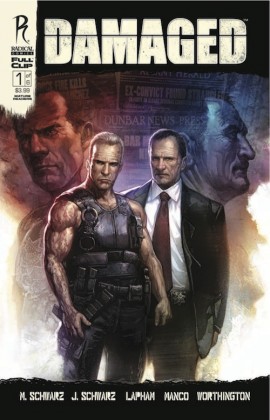 KL: Are there any small spoilers you can give about other upcoming Full Clip projects, particularly the collaboration with NBC Universal that was announced earlier this year, or the filming of Rick Remender’s The Last Days of American Crime?

MS: We’re in the process of packaging a bunch of TV shows. Some of them are for American TV, one is an Aussie show and there is a potential U.K. show, too. Our deal is with NBC International, so it allows us to play in a much bigger pool. But I can’t go into what those shows are just yet, unfortunately. Last Days is pushing along and there should be some casting announcements soon.

KL: And finally, on a lighter note, what’s it like as an Australian working and living, even temporarily, out of Los Angeles? Besides the obvious pros of sharing offices with Radical.

MS: I absolutely love living and working here in L.A. I’m a whole lot busier here than I am when I’m back home in Sydney, which is great. And it means that when I do go back home, it’s nice and relaxing. But to be able to work full time doing what we’re doing is amazing. I love the food and the people I’ve come to know. Plus, we’ve got a nice little community of Aussies here, so I don’t get too homesick. I do miss Sydney beaches, though.

Click the image to go to the original interview at SF Signal.