Let’s start with some background information on you, Leo. Where did you grow up?

I grow up in Buenos Aires, in a suburb South of the city.

Did you pursue a formal arts education?

Well, what I can say is I belong to the hard-working class of society and my parents did not have sufficient money to send me to a school of art. So at the age of 17, I took classes in a school for comics where we spent most of the time telling jokes, talking about girls and jumping from one seat to another.t At the end of the year we had a vague idea of what the human anatomy was.

The teacher was excellent and very patient with all of us, but I should admit that we were very lazy. I would have preferred of course to go to a great school of art. I’m sure that I would have had a lot of sex and would have tried different types of drugs. By the end of the year, I wouldn’t have learned much about the human anatomy either, but at least I would have had lots of fun.

Anyhow, speaking seriously, in this profession you learn more by experience than in any kind of school. Having the pressure of working for a company makes you more responsible and better at what you do.

Are you still residing in Argentina or did you ever make the move state-side?

I still continue living in Argentina, I suppose that someday I will be able to move to the US. Whenever I go there I meet a lot of people who I share much with and they make me feel like I’m in my own house.

One of our contributors introduced me to Mort Cinder, by Oesterheld and Breccia recently. Unfortunately it hasn’t been translated to english. Who are some other notable Argentinean comic writers or artists we should be aware of besides you and Juan Giménez?

Almost all the very good classic artists of the 70s and 90s, as Juan Zanotto, I Lucho Olivera, Altuna, Mandrafina, Alcatena, Zaffino, Jose Luis Salinas, Alberto Salinas, Enrique Breccia and many others that do not come to my memory now. But you have an excellent list here. There’s a very good book named Red Planet by Lucho Olivera, a work he did in the 1978 and if saw it today it seems to like it was made in 20 years in the future.

What’s the comic book scene like in Argentina? Is it more European or American?

In fact the comics in Argentina does not exist as market. It’s very limited and there are very few things that can shine with a European style. The artists who have an American style emigrate to the big companies like DC or Marvel. Let’s say that we adapt to our needs. But 20 or 30 years ago, the comics in Argentina had a realistic style—a mix between European and American, like Alex Raymond and others. 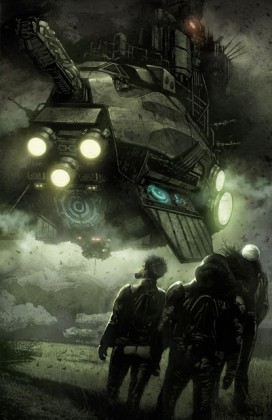 I read somewhere that Warren Ellis called you “The Mad Argentinian,” what was that about?

Oh, that such a long time ago. In that epoch with Warren, we were working together on a book for Marvel called Hellstorm. In fact, it was my first collaboration for Marvel. I was very young, and inexperienced and I have to confess that sometimes I had no idea how to interpret the scripts so I kind of trapped myself. I found courage and did some very wild compositions of the story with really crazy ink, centering more than anything on the personality of the characters hoping somehow the impact would hide the typical failings of an artist without experience. This was almost 20 years ago.

The result was very strong characters with hysterical madness in every outline every panel.

I should admit that I was really scared. I was scared of being rejected as an artist for this book. Hellstorm is a superhero and my version was not approaching anything in the superhero genre, but the surprise of that was well recieved. Warren baptized me “The Mad Argentinean” and we continued doing “madnesses” in Hellstorm and then, in Druid.

When you signed the exclusive 2 year deal with DC back in 2004 to work on Hellblazer, was that your first exclusive and how did that make you feel?

Yes, it was my first contract and I felt part of something really big—like I imagine any artist would feel in the same situation. It’s good to know there is someone who trusts fullly in your work enough to offer you a contract. The editor at Vertigo was Will Dennis, one of the best editors I’ve worked with and I will always be very grateful of this gesture.

You were lauded for your dark, gritty style on Hellblazer but then you seemed to adapt that style for science fiction and even drama when you started working with Radical. How do you explain your versatility?

The good thing about having a realistic style is you can adapt it to anything because you are faithful to a definite reality. It does not matter if you draw a western, horror or even sci-fi—the work of an artist is to be creative. Every book is an abyss and you don’t know what problems you will encounter until you are in the middle of the process. The timing of a western is not the same as a horror story, but if you are faithful to yourself, you can find enjoyment in the headache of being able to transmit the feeling and the atmosphere of the project.

That’s great advice from a seasoned pro. I wrote in my review of Damaged that any book in which you are collaborating with Kinsun Loh, Jerry Choo & Sansan Saw it’s practically a must buy. How did all of you guys get together?

These guys are really brilliant. I can hardly wait to see my pages after they’ve colored by them. They are a excellent artists—respectful professionals. It is an honor to be able to work with all of them. The person in charge who made it happen is Renae Geerlings, my editor at Radical. She is a very dedicated woman who knows exactly what she wants and how the things must be done. She decided to put us together and it was a perfect choice. Everything fits in the right place.

You’ve had a great run at Radical. How many titles have you worked on for Radical and which would you say has been your favorite?

Till now I’ve only worked on three—Driver for the Dead, After Dark, and Damaged—and though I like them all, I believe the next one will be the chosen one, or probably the following one… Or the one that follows this one

Obviously you are now inspiring a new generation of comic book artist, who inspired you growing up?

Oh, that you say that my work inspires the new generations is too much, I am still frightened whenever I see a blank page in front of me, but it is a great relief for my continuous backache to hear that.

About my influences, Alberto Breccia and Juan Gimenez were my inspiration in everything along with local artists like Lucho Olivera, Juan Zanotto, Alberto Salinas among others. When I was a child (in a galaxy, far far away), I use to read comics and copy them but these were not about superheroes.

They were horror, science fiction, classic adventure, westerns, etc. These guys made stories for adults and that’s what I grew up reading. Maybe this is the reason I like to draw the things I do. I want, in some way, to be a mix of all of them. I pretend to be a kid drawing the same stories that I use to read in my childhood… My God, I need a therapist…

What titles are you working on now and what should look forward to from you in the near future?

I am currently working on Damaged, and for the future, John Heffernan and I are talking about several ideas, ( John is a very passionate guy, he loves his work and he can find a good idea while just looking at a cup of coffee. It’s difficult to choose because all the ideas are good ) for Radical, but of course, I can’t say anything yet

Are you having fun yet?

Click here to view this article in Rations, issue 1 or click the image to the left to learn more about Leonardo Manco’s current series with Radical, Damaged.