Damaged #5 is “One of the Best Stories Out There”

As always, let’s recap first. The mafia in San Francisco is under attack, Henry Lincoln has been traveling the world dispensing his brand of justice, which finally led him home. He broke Isaac Lordsman out of jail, thinking that they were like minded, but he may have been a little hasty in his prodigy decision. His brother Frank Lincoln hasn’t been able to escape the one mistake they share that could have undone his entire career, but he’s retired now to hunt his brother. His replacement Jack Cassidy is left to question his belief in the system after hearing Frank and Henry’s story, and seeing the people that Henry has killed.

Jack is feeling the pressure to bring Henry and Isaac in before the election. 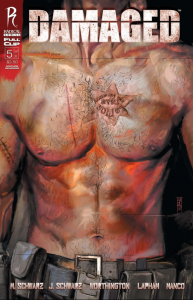 Henry is seeing the error of his way, as the dog he thought he has on his leash is clearly out of control, biting the hand that feeds him.

Frank is obsessed with finding his brother. He’s on a path of destruction or righteousness, depending on your view point.

And just when you thought the twists couldn’t get any better, the highs any higher. Damaged looks to be racing to a huge climatic finish. The story has been so full of blood and high energy, I only wonder if Lapham can give this story a satisfying ending, but one thing for sure, with Manco’s art, its going to be pretty atleast. Still one of the best stories out there, Damaged has continued to perform at such a fast pace without stumbling. I cannot wait for the final installment.

Click here to go to this article at MuseLed or click the cover image to learn more about Damaged.