Article by Anthony Breznican at EW.com 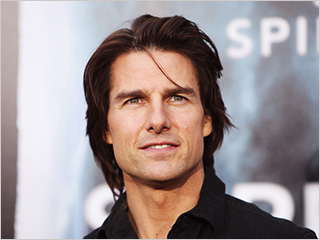 “It’s very rare when you feel equally excited about the words in a script and the visuals from a director, but Oblivion offers that combination,” said Universal Pictures chairman Adam Folgeson. “It’s one of the most beautiful scripts we’ve ever come across.”

The clips previewed at CinemaCon, the annual Las Vegas convention for theater owners, were a combination of early concept art, rough animation, and unfinished dailies. “It does not begin to demonstrate how spectacular the film will look,” Folgeson said, adding with a laugh: “And it gives you virtually no idea what the film is about.”

While there wasn’t any outright exposition, and the overall plot remains oblique, the scene gave us a small taste of the strange, futuristic world this film will explore, and it confirmed some speculation about the script.

The footage opens on a perfectly blue sky, and a series of glass and white steel platforms floating among the clouds. Picture The Jetsons by way of modernist architect Mies van der Rohe.

A small vehicle is perched on one of the platforms. It’s a kind of cross between a helicopter and a private plane. Inside is Cruise’s character: “This is Commander Jak Harper. Pre-routing electrical guidance and nav systems, all go.”

“Copy that, are you ready to go?” a computerized female voice asks.

Cruise’s character has a cocky look on his face. He’s done this a lot. “Oh, I’m ready to go.”

The copter-plane lifts off of the platform, but instead of rising, it plunges down through the clouds. Soon we see Cruise’s character gliding through a hole chopped into the roof of an old municipal building, what looks to be an early 20th century library, with lots of stone and wood and dusty chandeliers hanging in stark shafts of light.

Cruise is armed, and prowls through the library with his rifle drawn. We don’t know what it is he’s looking for, but he’s clearly expecting something hostile.

The comic book source material, co-written by the movie’s director — Tron: Legacy filmmaker Joseph Kosinski — can shed some light on what’s happening: “In a future where the Earth’s surface has been irradiated beyond recognition, the remnants of humanity live above the clouds, safe from the brutal alien Scavengers that stalk the ruins.” Jak (that’s not a misspelling) is a repairman, not a policeman. It’s just that one of his tools is a firearm, and his job is to look after the surface world on behalf of the 1-percent above.

Whatever he’s looking for, he finds it. Or it finds him.

There’s a small black device with a blinking light on it – some kind of trap. As soon as Cruise’s character sees it, he has time to whisper only “Oh s–t …” before a cable snares around his leg and yanks him across the room through a collapsing wall.

In the shadows are dozens of figures, and the light reveals one of them: Morgan Freeman, sporting round goggles. “I’ve been watching you, Jak,” he says.

Click here to read the full story at InsideMovies.EW.com.