MGM and Paramount Pictures to bring Radical Studios’ Hercules: The Thracian Wars to the big screen. 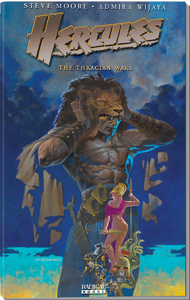 November 7, 2012, Los Angeles, CA – Radical Studios is excited to announce that its best-selling original graphic novel Hercules: The Thracian Wars will be adapted as a motion picture to be co-produced by MGM Studios and Paramount Pictures.

Hercules is an original graphic novel written by Steve Moore for Radical Studios. It is an action-filled story based on the popular Ancient Greek mythology of Hercules. The film stars Dwayne Johnson and is directed by Brett Ratner. Hercules will be produced by Radical President Barry Levine, Beau Flynn and Brett Ratner. Peter Berg, Sarah Aubrey, and Radical EVP Jesse Berger will executive produce. The screenplay was adapted by Ryan Condal with script revisions by Evan Spiliotopoulos. Production is scheduled to start in early 2013.

Please visit http://radicalstudios.com/ to learn more about Hercules: The Thracian Wars. The graphic novel is available for purchase on the site as well as digitally through iTunes and Amazon.

About Radical Studios: Radical Studios is a multimedia studio business model centralized around a catalog of stories and characters that are used as a basis for generating revenue streams across all media channels. The company is currently focused on building strong and diversified licensing revenue for its intellectual properties in both domestic and international markets, in physical and digital publishing, feature films, television, merchandise, recorded music, digital and online media applications and mobile and social games. Radical is represented by David Schiff of The Schiff Company and Phil Rosen of Rosen Law Group.