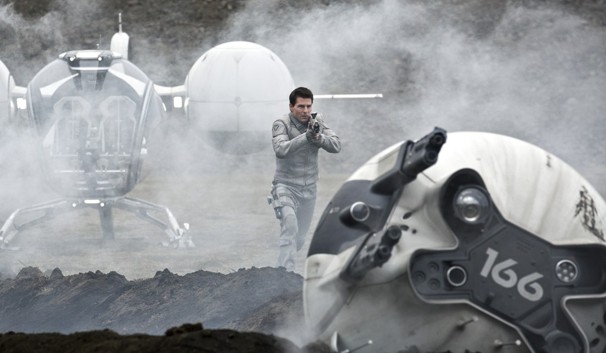 “Oblivion” looks marvelous, in the deliciously dystopian way of so many post-apocalyptic films. It’s set in 2077, after alien invaders called Scavengers (or “Scavs”) have laid waste to our moon, leading to cataclysmic floods and earthquakes that have ravaged Earth. The film features gorgeous CGI shots of such broken, half-buried landmarks as the Washington Monument and the Empire State Building, whose observation deck can now be accessed by walking onto it from a mountain of rubble. It’s the kind of film that’s perfect for the Imax format in which some theaters are offering it.Just be warned that this means it’s also very, very loud. One joker at a preview screening shouted, “Volume!” as the film was barely getting under way, to much laughter. He wasn’t complaining that it was too quiet.

It ought to look good. The movie, by director Joseph Kosinski (“Tron: Legacy”), is said to be based on a graphic novel by Kosinski and comic book writer Arvid Nelson. Although that book was never published — and probably never will be — the mock-up of the story drew the attention of star Tom Cruise, along with not one, but two, studios. Disney, which originally had the rights, ultimately gave them up to Universal, which made the film.

It’s an engrossing, if complicated and twisty, story, with plentiful sci-fi action and a provocative subtext about the nature of the human soul. At times, however, the balance between those two things feels off. Some of the fight sequences, which involve robotic flying “drones” mounted with guns, go on a bit longer than is strictly necessary.

Cruise plays Jack Harper, a futuristic maintenance man whose dangerous job consists of repairing the drones that patrol Earth, an unpopulated wasteland where giant “hydro rigs” convert seawater into energy to be used by what’s left of the human race, which has relocated to a colony on one of Saturn’s moons. Although we’ve won the war against the Scavs, there are still some left, and they like to sabotage the hydro rigs and the drones almost as much as they enjoy trying to kill Jack.

He and his partner/lover, Victoria (Andrea Riseborough), who provides backup from a command center in the clouds, have their work cut out for them, but it’s more routine than glamorous. “We’re the mop-up crew,” Jack says.

All is not as it appears, however. That scenario, as laid out by Jack in voice-over narration, soon starts to show cracks. The Scavs’ terrorist-style activities pick up, and a spacecraft loaded with humans in suspended animation crash-lands on Earth, drawn by an electronic beacon emanating from the surface. It’s suddenly as if the order of Jack’s world is turned upside down, including his understanding of who the good guys and the bad guys are. Even Jack and Victoria’s boss, Sally (Melissa Leo), who supervises their work from an orbiting satellite called the Tet, starts to seem not quite so maternal as she did at the beginning of the film.

More important, Jack starts to question his own identity; indeed, the very nature of identity itself. It’s worth noting that, although Jack and Victoria underwent mandatory “memory wipes” that erased everything they knew before starting these jobs, Jack is plagued by strange dreams of a pre-war Earth — a time when he wouldn’t even have been born — and of a beautiful but mysterious woman (Olga Kurylenko).

The film’s big reveal is satisfying but requires some mental effort. This is not a movie during which you should fall asleep. Fortunately, there’s not much chance of that. “Oblivion” is fast-paced and exciting.

As for the elephant in the room, it must be said that going to a Tom Cruise movie these days is more complicated than it used to be. The real-world baggage that this sometimes kooky tabloid staple brings to the screen is, for many, harder to ignore than it is with other movie stars, with the possible exception of Lindsay Lohan. That said, Cruise makes for a fine and even appealing action hero, perhaps because his character is someone without an apparent past. It’s as if “Oblivion” is inviting us to undergo our own memory wipes before seeing the film.

If you’re able to forgive and forget, “Oblivion” isn’t a bad place to start loving Tom Cruise all over again.