Tom Cruise was on hand Monday night in New York for an early screening of his new Universal film “Oblivion,” hosted by Hero Complex, and afterward, in a special interactive Q&A simulcast to nine IMAX theaters across the country, the star talked at length about his interest in making the film, citing in particular filmmaker Joseph Kosinksi, calling the writer-director seated beside him “a world creator” and a “true visionary.” 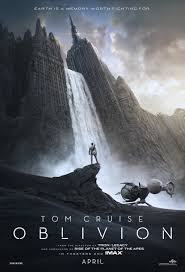 Based on a 2010 graphic novel Kosinski penned with comic book writer Arvid Nelson, “Oblivion,” which opens Friday, takes place on a future Earth left decimated by an alien invasion. Former Marine Jack Harper (Cruise) is one of a few people left on the planet to mop up after the war.

Kosinski, for his part, described how Cruise’s decision early on to star in the film, helped shape his final drafts of the script. “I knew everything I wanted Jack Harper to do in this movie, Tom was going to be able to do it,” Kosinski (“Tron: Legacy”) said.

To hear more of what Cruise and Kosinski had to say, watch the clip above, and look for more from the Q&A soon.