Olga Kurylenko and Tom Cruise at Oblivion premiere in London

It might be April but London was littered with snow and Olga Kurylenko seemed to be inspired by the wintery weather as she attended the premiere of Oblivion.

The 33-year-old actress dazzling on the carpet for the screening of the film in a flowing white dress with black lace detailing by Marchesa.

Olga appeared to create her very own blizzard as she made her entrance into the screening and braved the cold without a coat. 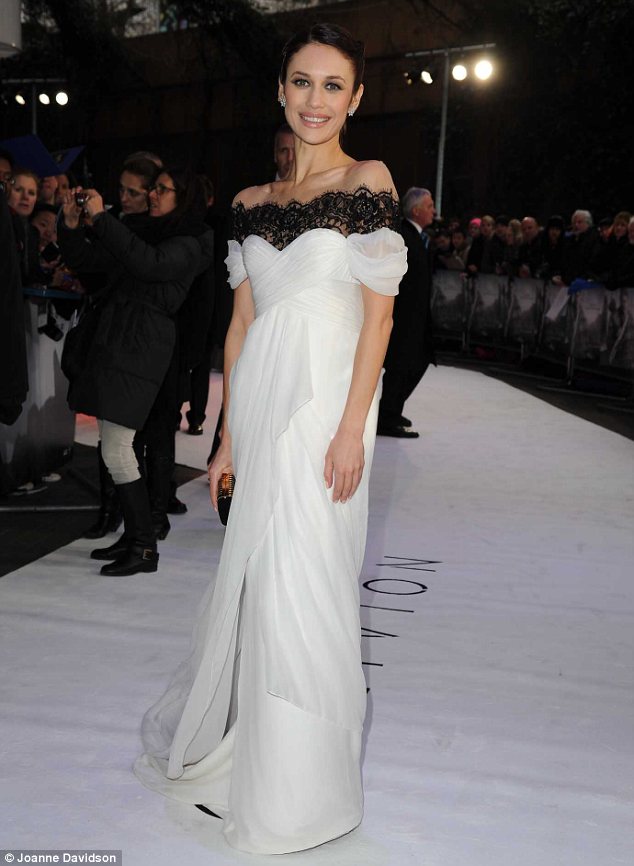 Snow queen: Olga Kurylenko dazzled in a flowing white dress with black lace detail around the neckline at the London premiere of Oblivion

The actress teamed the gown with a sleek pony tail and wore glittering diamond studded earrings.

For make-up the beauty sported flicked out eyeliner bronzed cheeks and pale lipstick, for a subtle but sophisticated look.

Ice maiden: The 33-year-old actress wore a flowing white gown with black lace detail and had her hair in a high pony tail as she made her way into the cinema

Creating a flurry: Olga’s outfit boasted a low-cut back, dropped sleeves and a long train for an elegant appearance

The star’s flowing white gown proved a little problematic given the blustery conditions and the skirt got caught up in the wind as Olga made her way along the carpet greeting fans.

The actress joined her Oblivion co-star Tom Cruise on the white carpet outside the Imax in Waterloo.

Tom looked dapper in a smart suit and told reporters that he had no qualms going topless on screen despite being 50-years-old.

He said: ‘I don’t get embarrassed, I just do it. 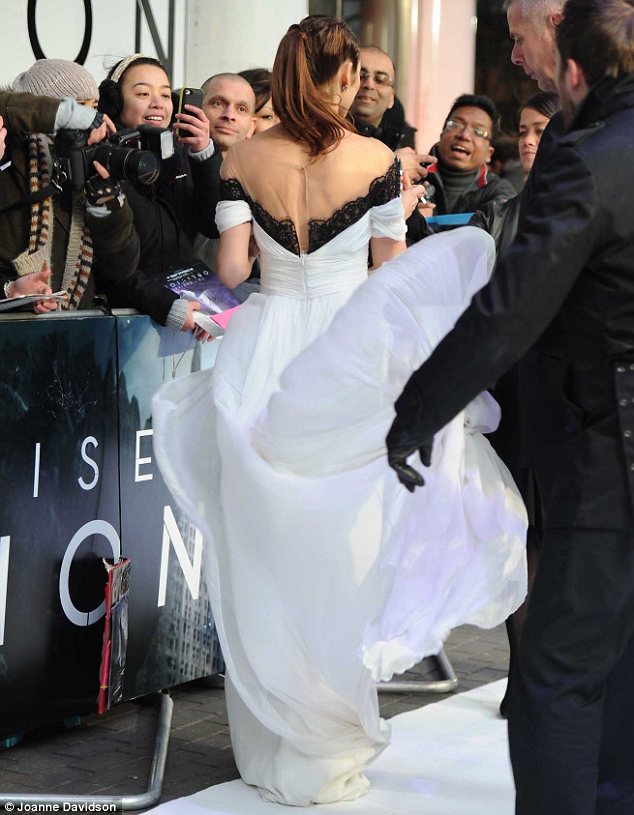 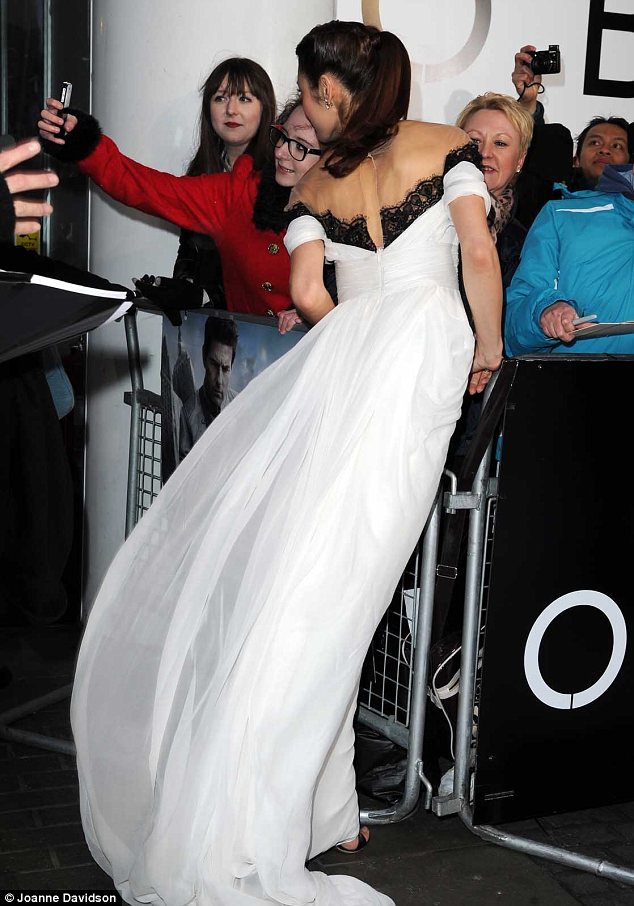 She’s getting carried away: Olga posed for snaps as her dress blew in the wind

Tom also revealed that he had been given the chance to be in charge of the scenes but his passion is acting.

He said: ‘I’ve been offered a number of times to (direct). But I love acting and I enjoy the process of working with the director.’

‘I started producing films just because of my love of it and I wanted to create stories that they weren’t making. So no, but I will act for the rest of my life.’ 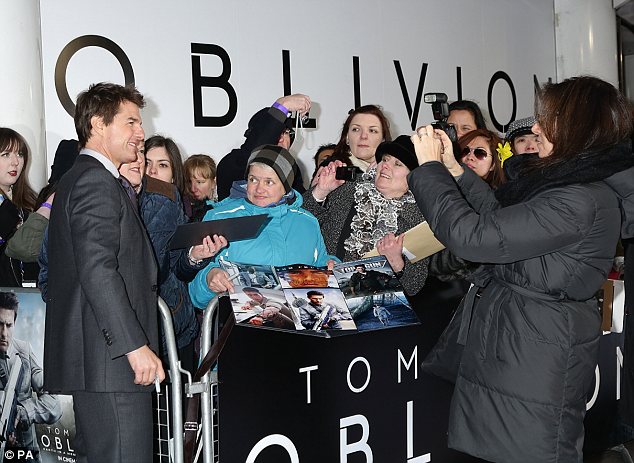 Pleasing the fans: Tom made time to sign autographs and pose for pictures despite chilly temperatures Great relationship: The actress said that Tom was a ‘generous partner’ and she also told reporters that the actor lights up a room Causing a stir: Olga patiently posed for pictures outside the cinema ahead of the screening and didn’t complain about the chilly temperatures Olga gushed about her co-star and said: ‘I was nervous about meeting him at first but when I met him, he was so open, kind and welcoming. Tom is a generous partner. And he lights up the room with his energy.

Organisers of the screening were seen placing heaters along the edge of the carpet in an attempt to raise the temperatures.

Ashley Roberts also stepped out to attend the premiere and it seems that the wintery weather had an effect on her wardrobe too – she was also wearing white. Body confident: Tom told reporters that he doesn’t mind taking his top off despite being half a century old Instead of a flowing gown like Olga, the singer wore a midi-length frock with silver sequin detail.

Amal Fashanu also attended the screening and while she did wear a furry coat she showed off her legs in a super short dress.

Set in 2073, in Oblivion Cruise plays 37-year-old former Marine Commander Jack Harper – one of the last few drone repairmen stationed on Earth, which was nearly destroyed by an alien invasion 60 years earlier.

As part of a massive operation to extract the planet’s remaining vital resources, he lives in an airborne ‘town’ floating thousands of meters above the Earth. Trying to raise the temperature: Organisers of the screening brought heaters to try and warm up the stars as they made their way up the red carpet

Was there a dress code? Ashley Roberts also wore white but opted for a mid-length style while Amal Fashanu wore a super short dress On screen: Cruise plays 37-year-old former Marine Commander Jack Harper – one of the last few drone repairmen stationed on Earth, which was nearly destroyed by an alien invasion 60 years earlier