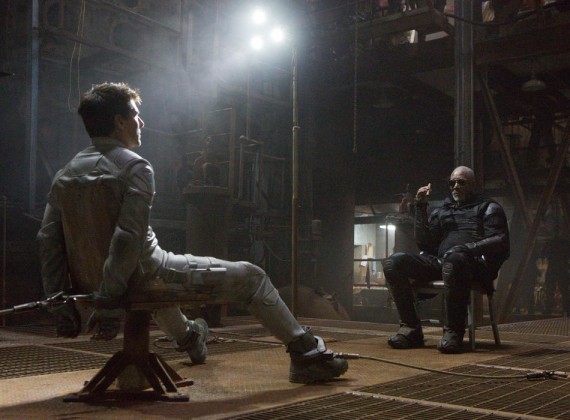 Oblivion might not have had a panel at WonderCon Anaheim, but it did have a presence. The movie’s Bubbleship was placed on the exhibition room floor, allowing fans to get an early taste of the new sci-fi vehicle

before Oblivion arrives in theaters April 19.

“People seem pretty excited. I was just down there. It’s the first time I think I’ve seen it since the shoot,” director Joseph Kosinski told Spinoff Online during a roundtable interview. “It’s fun to see all the little kids climbing all over it. That’s what you want to see, right? If I was a kid, it would be like me seeing an X-wing fighter in the flesh, so it’s cool. It’s great.”

Oblivion is Kosinski’s second film, and he said he learned a lot since making 2010’s Tron: Legacy. He lamented that the script wasn’t as tight on that movie as he would have liked, so he made a concerted effort to make sure he had a solid story for Oblivion. He also confirmed that this film is less CGI-heavy than Tron: Legacy was, with a focus on using as much in-camera as possible.

“What I really wanted to do with Oblivion is go in with a script that was really solid and finished,” he said. “With Tron we were on such a fast track, and there was so much momentum, I describe it as trying to change a tire on a Formula 1 car while you’re racing. That makes movies like this, which are already so complicated, that much harder. The goal with this one is to really lock the script down and get something really tight before we ever started shooting anything and I think we achieved that.”

Kosinski was inspired by ’70s “lonely man” sci-fi films like Omega Man and Silent Running when he came up with the idea for Oblivion. He actually devised the story in 2005, so he’s had eight years to marinate over concepts like the Bubbleship and the Sky Tower, which can be seen in the Oblivion trailers. Kosinski only recently wrapped the IMAX cut of the film, and he said it was sad to finally be finished with the project.

To help solidify the ideas behind Oblivion, Kosinski made an illustrated novel with Radical Publishing in 2007. The idea was for it to be a pitch kit to bring to studios to give them a sense of the world he wanted to create.

“I went off, I made Tron, always kind of working onOblivion in the background, and by the time Tron was finished I had this kind of package of materials that described the whole world visually to go along with the story I’d written,” he said.

As for why the Oblivion comic was never released, Kosinski explained, “Once the movie got picked up, for me I wanted Oblivion to be experienced as a film first. After the film comes out, then we’ll see if it makes sense to go back and pull the illustrated novel back together of if it feels like rearview mirror in a way because it’s evolved so much in the years of just making it into a film. So I don’t know. I don’t know if that will ever come out. I don’t know if it’s even relevant anymore.”

If the movie strikes a chord with audiences, Kosinski said he would consider creating more graphic novels to expand the universe. “We’ve created a world, we’ve created a history, so yeah if there’s a desire from an audience to know more about what happened before and after a movie, it’s a fun thing to think about,” he said.

One of the big draws of Oblivion is that it stars Tom Cruise, and Kosinski said he turned to actor’s experience during production. Kosinski would frequently ask about his time working with directors like Stanley Kubrick and Paul Newman, and said he enjoyed hearing advice from an actor who played a character in the film.

“He’s made enough movies, he knows where the pitfalls are, what the audiences needs. What I like about Tom is he watches movies like a guy who buys his own ticket on a Friday night. He doesn’t watch it like a movie star,” Kosinski said. “He really puts himself in the context of a guy going to this movie knowing nothing about it so I found he was great for kind of stepping back and saying, ‘What does the audience understand here? What do they need to know? What clarity do we need here so they’ll enjoy these beats more later?’ He was fantastic. He was really great at that.”

In terms of Cruise’s scenes flying the Bubbleship, Kosinski teased, “People who watch closely are going to see an homage. Look closely, you’ll see a Top Gun shot I put in there just for those Top Gun fans.”

Up next, Kosinski will likely begin work on Tron 3. “It has a working title,” he said, joking that’s called TR3N. “That’ll be our code name, but of course we have an idea. Nothing set in stone yet. Some exciting ideas.”

“We’re I think two weeks away from getting the draft,” he said. “This is a story we’ve been working on since 2009, so what is that? Four years now. I’m really excited about the idea we have for it. I think it delivers on the promise that both Tron movies have made. It opens the movie up in a way that I think is going to make it a much broader appeal, whereas Tron [Legacy] ultimately catered mostly to Tron fans. This idea broadens it up some more in really exciting ways, but it’s all about the script, just making sure that story is compelling enough to get all of us back together. Those movies are hard to make. It’s a two-and-a-half, three-year journey, so to go back to the Grid, it’s going to have to be a pretty spectacular script. We’ve got a great writer on it, so we’ll see.”

Kosinski also said he has some ideas for other new movies after Oblivion, although he’s not sure which one will be selected by a studio at this point in time.