The Rock Works Out Like a Demi-God for ‘Hercules’ Role 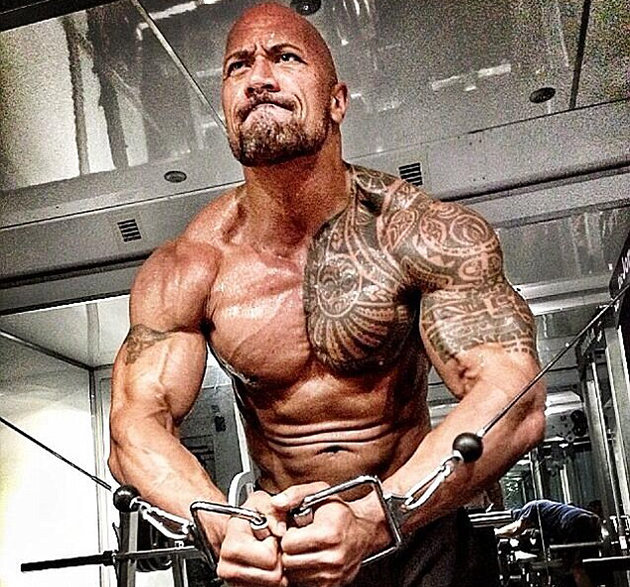 Dwayne ‘The Rock’ Johnson works out for ‘Hercules: The Thracian Wars’ (Photo: Dwayne Johnson/Twitter)Is it us or is The Rock even bigger lately? Is that even possible?

Dwayne Douglas Johnson has always been a sizable fella, though his physical appearance from his days as a 17-time WWE champion is positively wimpish compared to the way he looks in his several big-screen roles this year.

We first noticed Johnson’s superhuman physique as Roadblock, the heavy machine gunner who just wants to be a chef, in “G.I. Joe: Retaliation” (March 29). And just a month later he could’ve passed for the Hulk in Michael Bay’s “Pain & Gain” (April 26), in which Johnson plays a generally sweet-natured though hopelessly drug-addicted, born-again Christian bodybuilder caught up in an increasingly absurd kidnapping plan.

[Related: Video: The Rock Is Awesomely Added Into Classic Movies]

The 42-year-old appeared equally-yoked a month after that in “Fast & Furious 6″ (May 24), in which he reprized his “Fast Five” role as Luke Hobbs, a Diplomatic Security Services agent who isn’t beyond picking up a suspect and slamming him into the ceiling if it’ll get some answers. Johnson’s workout regimen for that film might have very well involved picking up grown men and throwing them across the room, as he barely seemed to be straining at all … nor did it seem like he was receiving too much of a special effects assist.

Now, Dwayne Johnson looks to be taking his astonishing physique even further as he takes on another crazy diet and workout regimen for his upcoming role as … well, the son of a god. Johnson will be playing the title role in “Hercules: The Thracian Wars,” a fantastical action-adventure directed by Brett Ratner (“X-Men: The Last Stand”) based on the Greek myth of the mighty muscle man born of the immortal Zeus and the mortal Alcmene.

A series of photos that Johnson himself providedvia Twitter show him hard at work to become Hercules. One pic shows him grimacing (we’re sure it’s just for show) as he pulls down weighted cables to work his upper arm muscles. The medium shot reveals that Johnson will be just as muscular than he was in “Pain & Gain” though perhaps not as, well, wide — his stomach and chest appear to be more toned than they were in Bay’s film, giving him more of an athlete’s physique than a hardcore bodybuilder’s. It’s just as well, too —Hercules will no doubt be involved in a lot more actual fight scenes than the hapless Paul Doyle.

The man’s arms are still ridiculous, though. Another pic features a close-up of Johnson’s deltoid, complete with fake scars as he’s transformed into Hercules in the makeup room. It’s about the size of Texas. This pic is also interesting as it gives a glimpse of the long-haired wig that Johnson will be wearing in the film — after all, you’ve got to get those dramatic shots of hair blowing in the wind, asBrad Pitt recently showed us in “World War Z.” 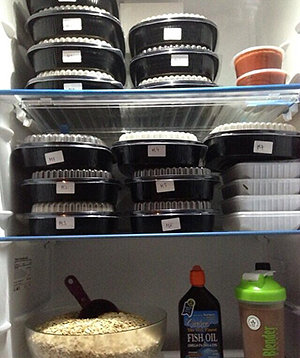 Another pic takes us back to the gym and shows off Johnson’s leg, which appears like it could kick a football to the moon (interestingly enough, the legs are Johnson’s personal favorite body part, according to AllStarWorkouts.com). Really, how do the other gym members feel whenever The Rock is around? Do they wonder why they even bother?

It’s not all about hitting the exercise equipment, though. You’ve got to eat a lot to get that big, and by “a lot” we mean at least seven meals a day. That’s right — the rest of us barely eat three, andDwayne Johnson eats seven. He even took a pic of the inside of his refrigerator, which reveals a series of seven pre-packaged meals on each shelf.

Believe it or not, Johnson would probably be eating seven meals a day even if he weren’t preparing to play Hercules. According to AllStarWorkouts.com, eating seven times is just another part of his everyday workout: “The Rock eats seven times a day. His crazy diet is about getting enough protein to aid lean muscle growth. The key to the Rock Diet is that he consumes a lot of protein, fibrous carbs, and starchy vegetables. Nutrition is everything. The reason The Rock eats this way, is because it helps him lose weight and gain muscle.” Diet AND exercise, people. 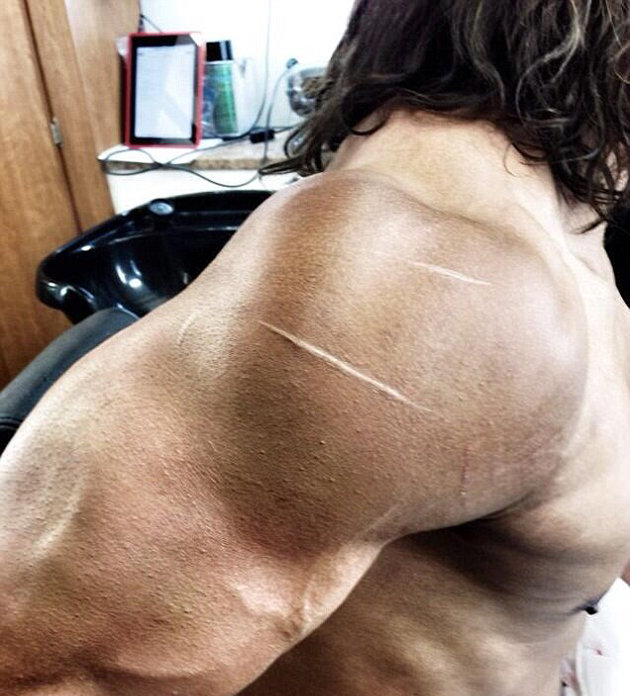 Taken in the hair and makeup trailer for ‘Hercules: The Thracian Wars’ (Photo: Dwayne Johnson/Twitter)

And here’s an idea of what might be in six of those seven containers in the fridge:

And the seventh? Apparently that’s between The Rock and his stomach.

You might also be wondering about that bottle of fish oil. According to Wiki Answers, fish oil contains Omega 3, an essential fatty acid that your normal American diet is almost devoid of. It supports heart health, joint health and brain health, including promoting memory retention, cognitive skills and supporting good moods! In addition fish oil helps to promote immune health and supports healthy eyes, skin and hair.

All essential elements in becoming the son of Zeus.

“Hercules: The Thracian Wars” will commence with walking amongst us puny mortals in theaters on July 25, 2014.