Greetings, folks. Ambush Bug here with another interview I conducted at the San Diego Comic Con. Special thanks to AICN’s unsung hero, Muldoon, for transcribing all of these back and forthings. Expect a ton of interviews to be released daily until my interview well is dry (and believe me, it’s going to be a while after this con). Here’s an interview I did with the founders of Full Clip Productions, which partnered with Radical Comics to create DAMAGED, a gritty series about a pair of brothers, one a retired cop, the other a retired vigilante, who take protégés themselves to live on. It’s a gorgeous book drawn by Leonardo Manco and scripted by David Lapham. Full Clip consists of Michael and John Schwarz (two brothers themselves) and their longtime friend, Sam Worthington (star of CLASH OF THE TITANS, AVATAR, and TERMINATOR SALVATION). I had a chance to chat with all three backstage at the Radical Booth at this year’s con. Here’s what they had to say about DAMAGED [...]!

MICHAEL SCHWARZ (MS): Thanks for that really good review, man, I really did appreciate it. It was very kind.

AMBUSH BUG (BUG): I loved the book. So, yeah, let’s talk about that. I’m here with Michael and John and Sam here for their book, DAMAGED, over at the Radical booth. So,  tell me a little bit about the story, just for people who don’t know about it right now.

JOHN SCHWARZ (JS): Yeah, it’s the story of two brothers who, back in the 70s, were young cops and there was an incident where they took the law into their own hands and it sent them down different paths- one of them stayed a cop, the other one became a vigilante. The story picks up modern day and it’s 35 years later and it’s a clash of codes and they are both [...] training [their] young replacements to sort of carry on their ideals.

BUG: So what’s your involvement in the story? How did you guys come up with this all together?

JS: Well, Mike came up with the initial kernel of the idea and then he and I and Sam, we all just sort of bounced around the idea and tried to build it up. Mike and I sat down and wrote out a treatment and then we would give it to Sam and discuss it with him. We were pretty flexible with the ideas and Sam would realize we were missing something and once we had something that we thought was a story, then we handed it on to David Lapham.

BUG: So how did David Lapham come to write this?

SAM WORTHINGTON (SW): We were big fans and he’s dealt with this type of material before, and I think, both with him and Josh Dysart, they are some of the best writers out there, so we aimed high and got lucky. We kind of… he liked the things that we were bringing up and agreed to do it.

BUG: What was it like seeing Manco’s work on here? His stuff is fantastic.

MS: Yeah, now, that was a huge thrill, to see that. Manco’s artwork was a complete joy for us, seeing the way that came together. He draws like it’s a movie. He wants to be a film director, so everything is cinematic. It’s always wide panels and every character is a real character and it’s real performances.

BUG: So how close is this to being made into a film? Do you know much about what’s going to happen with that?

SW: I think the idea, first off, has always been comics first. If, down the line, something eventuates, then that’s fantastic, but that’s not what we aimed for. Because we are comic fans, we aimed to make good comics. Obviously, because of my involvement, everyone believes “they’re just vehicles for Samuel,” but I’m not a 60-year-old man, so…

BUG: That’s what I said to Barry earlier. “They’re a little old for Sam to play them.”

SW: That’s right, and we just wanted to tell a story that could get out there. So we will see how it flies as a comic and, as I said, if something eventuates, fantastic, but that’s not our intention.

BUG: Great. So, what kinds of comics influenced this book?

JS: Obviously, The Punisher. That was the starting point for it, and then Mike’s idea was “what if the Punisher had to retire?” and that was sort of the genesis of it. We are all big Punisher fans and we thought, “Let’s just look at the idea of a vigilante, let’s look at the consequences of a vigilante and what drives someone to do it and how would you replace…”

SW: And from four different angles as well, four different characters and how they see the repercussions, so it wasn’t just kind of [the] force of nature that the Punisher is.

BUG: So, you being brothers, did that influence you in coming up with this concept of these two brothers being together?

MS: I think it’s one of those subconscious things, probably, if anything. It wasn’t like, “Hey, we’re brothers, so let’s tell a story about brothers!” I don’t know, it just sort of came naturally and maybe it’s subconscious, but we don’t know…

BUG: And it is about mentors and their protégés. How did that come about? What brought up that idea?

SW: I think sometimes in stories, ideas that you are interested in–obviously, that you are dealing with yourself- kind of [come] out in your work and, you know, we are new to this industry and we have mentors ourselves from the comic book [world] and film world and I think they are issues that we are dealing with in our own lives. They kind of just translate themselves into our story. I think it’s a subconscious thing.

BUG: Not to give away the ending of the book or anything like that, but are there more DAMAGED series planned after this?

JS: I think the great thing about a comic world is that it’s ongoing. If you look at how long SUPERMAN and BATMAN have been around and it’s reincarnations you know? We are still infants, but who knows where the story can take us?

MS: This is a complete six issue story, but there’s definitely room for more if everyone likes it.

BUG: And plus, with these characters being old, you could tell stories from the past.

MS: Yeah, exactly. We’ve talked about that, because we have come up with this huge origin story, obviously, for where they came from and what happened in the 30-year gap between Henry and Frank coming back together as brothers, so we could easily do that.

BUG: Tell me a little bit more about Full Clip. Do you have any other projects that are coming from your production company?

SW: We’ve just got the rights to make ROGUE TROOPER into a movie, because we are all big 2000 AD fans, and we are currently working with NBC to make TV shows, but we just look at it as a melting pot and someone’s allowed us lunatics to play in the asylum. As far as we are going, we just kind of keep bouncing, keep our feet grounded and try to tell good stories.

BUG: ROGUE TROOPER is a great series. So, how’s the con been treating you this year?

SW: It’s been good. I love it. The boys didn’t think I could walk around, but I’m having a ball. No one recognizes me because I’m fat and ugly. I don’t look like Natalie Portman.

BUG: You’ve got a lot of hair. [Worthington had a full beard and long hair at the time of the interview.]

SW: I look like Chewbacca, so perhaps people think it’s a costume, but it’s awesome. I love it. 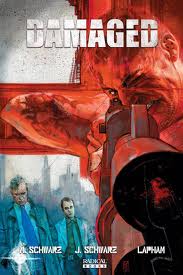 BUG: Is this your first con here?

SW: And my third…

BUG: Great, well, guys, thank you very much for talking with me today. I appreciate it. It’s a great book, so anything else you might want to say to the Ain’t It Cool News fans?

BUG: It’s definitely a great book. Issue one of DAMAGED is in stores now with issue #2 hitting the shelves on September 21st from Radical Comics! I highly recommend you pick up this awesome series.

Click the image to go to this article at AICN, where you’ll also find previews of DAMAGED #2.