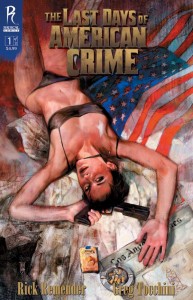 Deadline is reporting that commercial and music video director Anthony Mandler, who’s worked with celebrities like Jay-Z and David Beckham, is set to make his feature film debut with The Last Days of American Crime, based on the graphic novel by Radical Publishing.

Based on the Rick Remender comic book, the film version will have a script by Karl Gajdusek after Remender wrote a first draft for the film.

“The Last Days of American Crime” takes place in the future, as America responds to a second major terrorism attack by developing technology that eliminates the impulse to commit crimes of any kind. The protagonist leads a heist team that plans to pull off a final job five days before the signal rubs out the criminal instinct. Noomi Rapace had been attached, though it’s unclear if she remains so.