This Tom Cruise vehicle is a throwback to the days when on-screen science fiction was about speculative ideas rather than selling toys to tots — think of it as the most expensive episode of “The Twilight Zone” ever made. 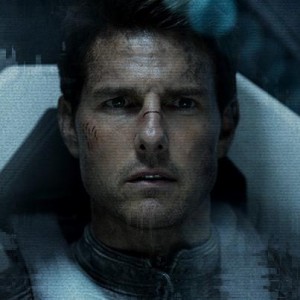 “Oblivion” is not perfect. Its dystopian story makes no apologies for its familiarity, echoing such films as “The Planet of the Apes,” “The Matrix,” ”2001″ and even “Wall-E.” And expecting the wheels not to eventually begin to fall off its pleasantly complicated, head-spinning plot (based on the director Joseph Kosinski’s graphic novel) is asking a little too much.

But even given all this implausibility, “Oblivion” has the ability to haunt you visually and, with an unanticipated love story, even emotionally. Written by Karl Gajdusek and Michael DeBruyn, this is a piece of futuristic fiction intended for adults, not their children, a film in which firefights and futuristic weapons feel more like afterthoughts than reasons for being.

Given that the film is set on an Earth 60-plus years in the future, a time after an invasion by rapacious aliens (are there any other kind?) has completely devastated the planet, we’re expecting to see ruins aplenty, and “Oblivion” does not disappoint.

Overseen by production designer Darren Gilford and shot by Claudio Miranda, whose “Life of Pi” experience blending physical components and computer-generated effects stood him in good stead, “Oblivion’s” snapshots of CGI devastation are enhanced by being shown against real Icelandic landscapes.

Whether it be beached warships, the Washington Monumentlooking like that tower in Pisa or an elaborate re-creation of the wrecked main reading room in the New York Public Library‘s Fifth Avenue branch, these images linger in the memory after they’ve faded from the screen.

Director Kosinski (“Tron: Legacy”) has an architecture background and it shows in the sleekly futuristic look the film gives to both the highly mobile Bubble ship, a combination jet plane and helicopter that looks like a flying can opener, and the Skytower, a coolly minimalistic residential structure set 3,000 feet above the surface of the earth.

As important as “Oblivion’s” look is its good fortune in having Cruise in the starring role of Jack Harper. The actor is essential in bringing conviction and credibility to this made-up world, and he also expertly handles the huge chunk of voice-over exposition that gets us up to speed in a complicated story.

“Oblivion” starts not with the future but with a black and white dream of Harper’s “Earth before the war, New York before I was born.” It’s a dream of a woman Harper feels he has some connection with, but given that the year is 2077, five years since Harper underwent a “mandatory memory wipe” for security purposes, he’s not surprised that he can’t quite figure it out.

The film’s back story is this: that an invading alien force lost the war but so destroyed Earth in the process that all of the planet’s survivors have moved to Titan, one of Jupiter’s moons. There life is supported by huge fusion reactors on Earth that create energy by relentlessly sucking up seawater.

But because remnants of the alien force, known as scavengers or scavs, remain active on the deserted earth, mechanized drones are needed to protect those vital reactors. And because anything mechanized tends to break down, human repairmen are essential, which is where Jack Harper comes in.

Known officially as Technician 49, Harper lives in that Skytower with his navigator, Victoria “Vika” Olsen (the gifted Andrea Riseborough), who stays in touch via video link with their commanding officer, down-home Sally (Melissa Leo, always effective). In just two weeks the pair are scheduled to be rotated off Earth, and though Vika for one can’t wait to leave, Harper is not so sure.

“Oblivion” is in no hurry to have its tricky plot unfold, and that enables the film to take full advantage of its lonely, “there’s nobody out there but us” scenario. We get to spend a lot of time with this one-man-band as he flies around servicing downed drones far and near on Earth’s vastness (chewing gum comes in surprisingly handy) and displaying a fondness for the flotsam and jetsam of the planet.

Because the spaces are so vast and the people so few, “Oblivion” unexpectedly plays at times like a chamber drama, so the high caliber of the two leads, joined later by Morgan Freeman, Olga Kurylenkoand Nikolaj Coster-Waldau, is a key factor in how evocative the story becomes.

For in typical Rod Serling fashion, what starts out simple and straightforward gets increasingly less so as reality-bending plot zigs and zags become the order of the day. More adventurous than your typical Hollywood tent pole, “Oblivion” makes you remember why science fiction movies pulled you in way back when and didn’t let you go.