Guest Column: ‘Oblivion’ will be difficult to compete with

Summer has arrived and with it, so has the film season. This year, we are finally greeted with an onslaught of science fiction. Primarily, “After Earth,” starring Will Smith, and “Elysium,” with Matt Damon. Both have something different to offer: “After Earth” shows an Earth where everything has evolved to kill humans and “Elysium” takes another approach. The overpopulated poor live on Earth while the rich live on an orbiting space station called Elysium. Do either sound familiar? A film that was plagued by comparisons was “Oblivion,” starring Tom Cruise. It seemed to slip under the radar and unfortunately we’ll have to wait and see if the other science fiction films are any more original than “Oblivion.” I doubt it. 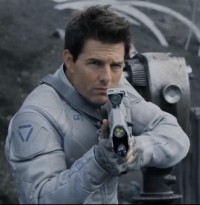 According to some critics, “Oblivion” is around average, with the plot taking a back seat next to the stunning visual effects — the one thing that, across the board, critics have agreed on. The visual effects of “Oblivion” did what all good visuals do: They make us want to live in the world even if it’s post-apocalyptic and degraded. Despite this praise, unfortunately critics have compared it to such films as “Wall-E.” Really? Even if both films are post-apocalyptic, have robot(s) and the main characters are explorers, that still doesn’t make them comparable, especially if you consider that “Wall-E” was an animated film. If every critic were to compare every film to films of the past, no film would ever be original, and “Oblivion” is exactly that.

In “Oblivion,” the Earth is destroyed by an alien race known as the Scavengers, or Scavs, who first blow up the moon and afterward send an invasion army to finish off the rest of the humans. Jack Harper (Cruise) along with his partner Victoria Olsen (Andrea Riseborough) are two of the last remaining humans on Earth, assigned to repair drones and the gigantic hydro sky structures the drones are charged to defend.

To repair the drones, Jack Harper flies around in a ship and rides a collapsing motorcycle if the ship doesn’t get the job done while Olsen gives him support from the “floating” house they live in. Another reference is made here by Anthony Lane of the New Yorker, “In ‘Oblivion,’” he spends his days traversing wastelands on a motorbike (the first choice for Cruise-transportation, as it was even in “Top Gun”). Would you prefer a bicycle?
Viewers are used to seeing actors reprise roles that they’re good at: Leonardo DiCaprio, Steve Carrel and Cruise. In “Oblivion,” it felt different. Whether it was the environment Cruise was in or if it was he was just perfect for this role in particular, I wasn’t constantly annoyed that it was Cruise and not someone else portraying Jack Harper.

In his sleep, Harper consistently dreams of spending time with a different mysterious woman next to and on the roof of the Empire State Building. During his missions he visits a number of iconic buildings and in his spare time, a part of Earth that is surprisingly untouched by the effects of the Scav’s attack. Herein lies another issue that some critics have with “Oblivion.”

All the buildings Harper visits are the same buildings that have been used in countless other movies: the Empire State Building, the New York Public Library, and a half-demolished football stadium.

Viewers had the same issue with “Transformers 2 Revenge of The Fallen” and their use of the Pyramids, but what do you expect? Directors could use lesser-known buildings, maybe try some more local to the area, but then no one would recognize them nationally and they’d be complaining about that even more. Additionally, in the case of “Oblivion,” Cruise and the woman he’s with are on vacation. It just makes sense.

While on one of Jack Harper’s missions, a space craft built before the invasion crashes and he investigates the site. He finds humans in deep sleep pods that are destroyed by the drones Harper is charged to repair. In disbelief, he manages to save one pod and is surprised to find the woman from his dreams inside. The woman — Julia Rusakova (Olga Kurylenko) — after recovering, insists on returning to the crash site to recover the ship’s flight recorder and when Rusakova and Harper do so, they’re captured by the Scavs. Enter: Morgan Freeman as Malcom Beech, the leader of the Scavs, and one of his most epic roles to date.

From here on out, to expect the unexpected would not be an understatement. Beech orders Harper to reprogram a drone that would deliver a nuclear bomb to the Tet and destroy it. He refuses and Beech releases his prisoners but encourages them to explore beyond the radiation zone that is off limits to Harper, saying, “You might be surprised by what you find there.”

What might be surprising for some is the quality of acting for every role, particularly the supporting ones. We know what to expect from Freeman and Cruise, but the awkwardness and emotion toward one another of Riseborough and Kurylenko was intense and kept me filled with anticipation as I waited for Victoria’s reaction to the arrival of Julia. Even Beech’s second in command, Sykes (Nikolaj Coster-Waldau), is quite possibly one of the first that you don’t want to be killed off in science fiction history.

With an original plot, immersive visual effects and quality acting, the rest of the science fiction films of 2013 will find it difficult to compete with “Oblivion.”