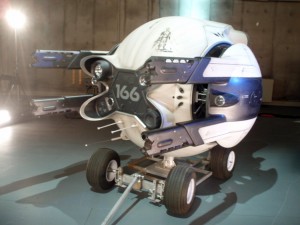 Like so many other big box office ($286 million worldwide) releases, Oblivion was out on digital from Universal Studios Home Entertainment July 23, two weeks before the Aug. 6 disc releases.

“I’ve noticed that seems to be the case now,” said Kosinski, whose directorial debut was another effects-laden thriller, Disney’s Tron: Legacy. “The way I would do it is through Apple TV. I’m fine with it.”

“Personally, for me, Blu-ray is the ultimate way to see this film,” he said during a recent press event for Oblivion. “We’ve encoded the Blu-ray for this movie at over 30 megabytes, the video track, the highest-quality video you can fit on a Blu-ray. We have the lossless DTS master soundtrack. We have an incredible, 96-kilohertz, soundtrack-only of the movie.

“For those people who want the absolute highest-fidelity version of the film, Blu-ray is the way to go,” he added. “For people who can’t wait, and have to get a peek at it two weeks early, you’ve got the download option.”

With disc, Universal hands owners a slew of otherwise-unobtainable bonuses, including a commentary with Cruise and Kosinski, deleted scenes and a multi-part, making-of feature, one that offers Blu-ray owners exclusive content.

Eric Barba, visual effects supervisor for the film, said the bonus features give Blu-ray owners true insight into the amount of work that went into the visual effects — live and CGI — for Oblivion.

“This was challenging in that Joe wanted to shoot so much of this live, that out job was to integrate everything as seamlessly as possible,” he said.

Daniel Simon, the concept designer behind Oblivion’s “Bubble Ship” — which earns nearly as much screen time as Cruise himself — said nearly three years of work went into the prop, from sketches to functional, full-size prototype.

“There is so much spec behind this,” Simon said. “It took a year — about every day — of work. We have wonderful visual effects on the film, but if you need an actor so heavily involved with it, sitting on it, you open a can of nightmares if you do visual effects only.”

The creation of the Bubble Ship earns its own Blu-ray-exclusive bonus feature with the featurette “Voyage.” Blu-ray owners also get the exclusive featurette “Combat,” which delves into the stunts of the film.

Yet for all the attention paid to action and eye candy in the bonuses, Kosinski is still hopeful disc owners check out that oldie but goodie: the commentary.

“Tom and I have been talking about this movie for a couple years, so what people are going to hear in that commentary is a very kind of informal discussion, talking about the things we were thinking about as each scene comes on,” he said. “For some people, it might be interesting to hear.”