One Studio’s Plan To Make Millions On The Big Screen

Barry Levine’s office is decorated with mementos of the 65-year-old’s long history in the entertainment business. There’s the framed cover of Motley Crue’s Shout at the Devil, which Levine shot when he was working with the band, and a poster from one of his proudest music supervisor jobs, Driving Miss Daisy. Then there’s the bronze statue of an intricately muscled Hercules wearing a lion’s pelt.

A mirror image of the statue is tattooed on Levine’s arm. He wears it as a sign of dedication to his latest endeavor: Radical Studios. Levine and his 32-year-old partner, Jesse Berger, founded the company six years ago with a big idea: Create new comic books, own the intellectual property and license the stories to Hollywood. By holding on to the underlying rights, Levine and Berger believe they can make millions with books, merchandise and video games spun off of the movies.

Comic books are the hottest source material for movies these days but the vast majority of those films come from the two industry granddaddies: D.C. and Marvel. Tiny Radical is a relative success in the industry with two big-budget movie adaptations. Earlier this year Oblivion, which starred Tom Cruise, grossed $286 million at the global box office. 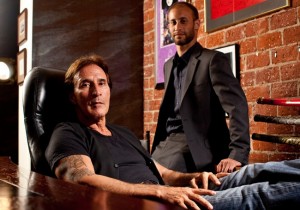 Then there’s Hercules. Based on Radical’s first comic book series, this version of the story takes place after the hero completes the 12 tasks. It’s a kind of a sword and sandals The Magnificent Seven. The film, starring Dwayne “The Rock” Johnson, hits theaters next summer. MGM and Paramount, the two studios financing the movie, are very hopeful they have a new franchise on their hands.

Other Radical properties in development include Earp: Saints for Sinners, which Sam Rami had been circling, and Caliber, a reimagining of the Arthurian legend with Johnny Depp’s production company.

“They’ve established themselves as players,” says Peter Cramer, Co-President of Production at Universal Pictures. “They’ve done a nice job getting a foothold with the studios.”

But with $1.3 million per year in operating expenses, the company is just a little over the break-even point. Radical is very much in the development phase. On Oblivion and Hercules, Berger and Levine were only able to hold onto a sliver of the rights that lets them sell spin off merchandise in comic book stores, online and at conventions. No Wal-Mart deals for them. Instead look for fancy figurines at your local shop when Hercules hits theaters.

“It was a tough pill to swallow,” admits Berger. “The key thing I want to make clear though is that in building a brand, you have to have a few sacrificial lambs.”

Growth is not a problem for Levine. He embodies Hollywood grit.  He got his start in ‘70s London photographing bands like Queen and Abba. When hair-metal band Motley Crue suddenly found itself without a manager, Levine stepped in.

“It was kind of like living in hell,” says Levine. “It wasn’t a question of them being difficult. It was a question of how do people communicate when they’re always on drugs.”

The experience pushed him out of the rock ‘n’ roll world. He did time as a movie music supervisor and an independent producer of films like Detroit Rock City which featured his old friends Kiss. He spent some time working with Dark Horse Comics looking for movie possibilities. In 2006 he met Berger, then a fresh-faced college grad peddling a script about a group of teens who get supernatural powers. The script was weak but Levine and Berger hit it off. While trying to improve the story, they came up with the idea for Radical.

“There’s a high concept under these scripts,” says Levine. “If you own the concept, you own the property and that puts you in a power position.”

From his time as a rock photographer Levine understood the power of images. By combining original stories with art, not only would the company producer comic books and graphic novels but they would be able to copyright their material and have very visual pitches ready for studios.

Their first move was to build a library of comic books which would provide plenty of pitching material and a steady source of income for the young company. Hercules was their first book to hit the stores in 2008. With $850,000 raised from family and friends, Levine and Berger splurged on an expensive artist, Jim Steranko, to create an iconic image for the comic. They decided to sell the first edition for just $1 and spent months cold calling 4,000 comic book stores around the country to convince them to carry the book when the distributor came calling.

Hercules was a hit. They raised $5 million more from Lacho Calde, a Singapore investment company, and doubled down on comic book production. Hoping to be known for quality, Levine sometimes rejected finished pages and demanded the art be improved despite the cost.

When the economy tanked in 2008, the comic book world went with it. Berger and Levine had already sold the rights to Hercules for $100,000 upfront. They refocused their money and effort into making elaborate pitch books for studios. The pitch for Earp comes in a box with a gun. The Mata Hari pitch book looks like something dug out of the rubble of World War II.

Luckily for Radical, Levine is one of the best pitch men in town.

“Barry is a force of nature,” says Jonathan Glickman, head of MGM’s Motion Picture Group. “You don’t have to work to pay attention to him because he’s very entertaining.”

The art Levine dragged with him to each pitch helped. Normally executives spend all day listening to screenwriters tell stories. But with Levine’s powerful images, the pitches came to life.

“Studios are in the business to say, no,” says Levine. “So we have to give them every conceivable reason to say, yes.”

With the studios salivating over their properties, Levine and Berger now have to work on exploiting the rights they have on upcoming movies like Hercules. Figurines are in the works and they’ll be able to do some kinds of interactive gaming (though not the official video games of the movie).

With their track record with Oblivion, and nowHercules, they should be able secure more rights in the future and eventually raise money to produce their own movies where  they could hold on to 100% of the ancillary rights. But getting any movie made is a Herculean task. Levine can always check his arm when he needs to remember that.